Botros Ghali as the psychiatrist

Asmaa is a woman in her 40s living with her aging father Hosni and teenage daughter Habiba in Cairo, and struggling to support them with her meagre earnings from a menial job at Cairo International Airport. She is HIV-positive and requires surgery on her gallbladder, without which she will die. Doctors refuse her surgery when she reveals that she has AIDS.

In a series of flashbacks, the film gradually reveals Asmaa's earlier life in the Egyptian countryside. As an independent, strong-willed, young woman helping her father sell rugs at the village market, she falls in love with and marries Mosaad, an army conscript. In the midst of a brawl over a dispute over his wife’s stall at the local market, Mosaad inadvertently kills another man. He is sent to prison for the killing, but the sentence is relatively short considering the circumstances. During his time in prison, he contracted AIDs, and after his release, he refuses to have sex with Asmaa, but does not tell her why. Eventually his secret comes out, but Asmaa is still willing to fulfill Mossad's wish for a son. After Mosaad's death, while Asmaa is pregnant, she agrees that if she gives birth to a son, she will leave him with Mosaad's family, so that the family will have an heir for their land, but that if she gives birth to a daughter, she will leave and take the daughter with her.

The flashbacks contrast with the more subdued life of Asmaa in Cairo, where Asmaa joins an HIV/AIDS support group. The group is approached by self-promoting talk show host Mohsen el-Seesy who tries to persuade Asmaa to appear on his show and to reveal her true identity, arguing that this will enable her to have the operation that will save her life. Asmaa has been living for years with HIV, but only her father knows of her HIV status, and she is terrified to reveal it publicly, especially to her daughter Habiba. Asmaa has been having difficulties at work for a long time. Her employer insists on seeing her medical records, but Asmaa keeps making excuses. Assured that she cannot be legally fired for having AIDS, she finally produces the medical records. Instead of firing her, her employer asks her fellow workers whether they want to continue working with Asmaa, receiving a reluctant but overwhelming negative answer, so Asmaa effectively loses her job without being fired.

A charitable foundation offers to treat Asmaa, if she will say how she caught the disease, but Asmaa refuses. Asmaa is adamant that she won't reveal how she came to be infected by HIV, saying that everyone has a right to be treated. After a long struggle with her dilemma, Asmaa agrees to appear on Mohsen's television show anonymously, but Mohsen succeeds in persuading Asmaa to reveal her identity, leading to an emotional climax for the film. 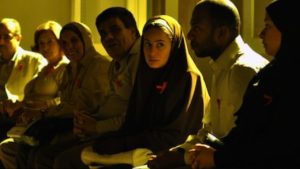