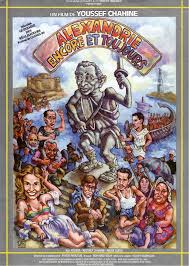 The last film in prolific Egyptian director Youssef Chahine’s semi-autobiographical trilogy, Alexandria Again and Forever centres around Yehia Eskandarany (played by Chahine), a seasoned film director who faces a mid-life crisis over the state of Egyptian cinema, the influence of oil-wealth on his beloved profession, and the unfairness of western film awards. Through flashbacks to previous parts of his career and musical numbers, Yehia maps his critiques of the Egyptian and global film industries, and fantasizes about his latest extramarital love interests. The film features The film was selected as the Egyptian entry for the Best Foreign Language Film at the 63rd Academy Awards, but was not accepted as a nominee.