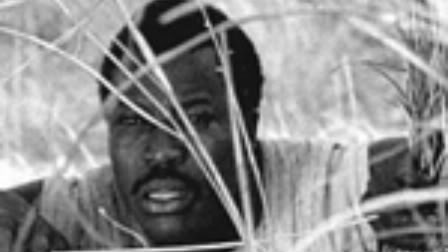 Tiga wakes up one morning and, like any other morning, he goes to the field.  However, on this morning, before going to the field, he has three bad omens; he bumps his left foot, he kills a newborn black chick, and he hears the chirping of a bird that sings off-key. He wonders what will happen in the day to him. In the nearby woods he builds a chair in peace, away from the noise of his children and other villagers. The chaotic sight of a woman crying for help as a machete-wielding man chases her through the plains soon interrupts Tiga’s relaxing pastime. He hears the young girl crying for help and watches the wielding ax man. He then picks up his rifle and shoots him. It was a production shoot and these two people were the actors in the film.