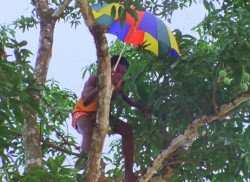 An African storyteller, humorously and kindly, talks about how some of his fellow countrymen are emulating the habits of white people and "Their stuff". He thus presents several cases to prove his point. In one of them a supposed to be planter and businessman who underpay an employee gets framed by his own folks. A young boy, jump from a high tree with an open umbrella to copy the way the parachutist do in the city. A few other examples are as pathetic or comical. At the epilogue our storyteller finds himself being laughed at, at a bistro in Paris. The way he deals with the situation is kind, and again humorous.