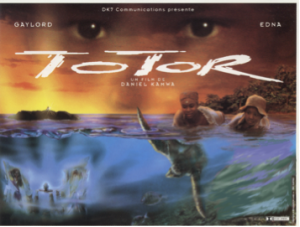 A boy and his turtle provide the main story in this film, which alternates between surrealism, comedy and graphically violent drama. The film contains a very realistic circumcision scene that may be disturbing to some viewers. Mentse, the main character, is a young boy. After his mother is burned to death in a murder, Mentse goes to a neighboring village where he is adopted. Totor, an adorable turtle, provides much comic action as the villagers fight for him.