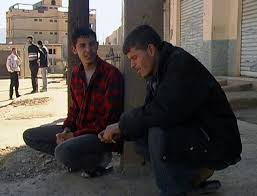 In the small Algerian town of Kabylie, it is hard to find work and the people rather dream about better life in France. A reconstruction project is initiated in order to allow them to be active by planting trees and painting. Using the recordings in Mourad Zidi’s digital camera, Sahraoui is able to capture the expressions of the people who live there. He interviews them for their opinions on the political and social situation until pent up frustration with the government leads the people to start anti-government demonstrations which led to the deaths of 120 people. This film shows the reality that the city outskirts are filled with unemployed people who feel repressed about their government.