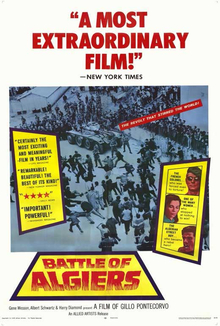 The Battle of Algiers is a historical war film based on the events of the Algerian War of 1954-62. The film depicts the struggle between the FLN (Front de Libération Nationale/ National Liberation Front) and the French colonial powers in Algeria, particularly through means of guerilla warfare. The story is primarily told through Ali la Pointe, a real-life guerilla leader of the FLN (portrayed by Brahim Haggiag). Aside from the character of French Colonel Mathieu (Jean Martin), the film used primarily Algerian actors, including many real-life members of the FLN, and thousands of Algerian actors as extras. Because the film was shot on location in Algiers, Pontecorvo specifically notes in the credits that “not one foot” of documentary or newsreel footage was used in its production. While the film was considered controversial upon its initial release, The Battle of Algiers is still considered to have universal relevance today.

Michael T. Kaufman, “What Does the Pentagon See in ‘Battle of Algiers’?” New York Times (newspaper)

Carnegie Council for Ethics in International Affairs, “Ethics on Film: Discussion of “The Battle of Algiers”

Madeleine Dobie, “‘The Battle of Algiers’ at 50: From 1960s Radicalism to the Classrooms of West Point,” Los Angeles Review of Books (magazine)

The Other Battle of Algiers: Overcoming an Architecture of Oppression by Natasha Marie Llorens. World Policy Journal, Volume 35, Number 2, Summer 2018

The Illegitimate Legitimacy of The Battle of Algiers in French FIlm Culture by Patricia Caillé. International Journal of Postcolonial Studies, Volume 9, Issue 3, 2007, pp. 371-88

Women at War: The Representation of Women in The Battle of Algiers by Daniѐle Djamila Amrane Minne, translated by Alistair Clarke. International Journal of Postcolonial Studies, Volume 9, Issue 3, 2007, pp. 340-349