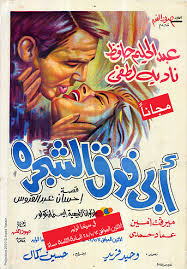 The main character Adel is from Cairo and is in a group of friends who all attend a university, where Adel majors in engineering. During the summer, Adel and his group of friends all go on a two week vacation in Alexandria. While on vacation, Adel attempts to charm his girlfriend, Amaal, into spending time alone together, however, she refuses to do so. After the dispute, Adel is frustrated and then meets and falls in love with a nightclub dancer, Firdaus. Together, they have an affair together, however Adel's world quickly spirals downs due to alcohol, gambling, and deception. Adel is unable to handle the life style of Firdaus, as she has to constantly hustle other men in order to make life's expenses. After trying to go back to his friend group, including Amaal, he learns that they have shunned him. However, word gets back to his father, who then comes to Alexandria to bring him home, and it is up to Adel to learn what he must do.

My Father is up the Tree (1969), by John Green; Movie Poster Collecting