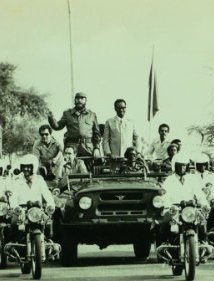 During the Cold War, four adversaries with conflicting interests face off in the African continent: the Sovietswant to expand their influence; the United States intend to appropriate the continent's natural riches; the former empires seek to revive their shaky colonial power; and the young nations defend their newly-won independence, armed with an ideal: internationalism. African revolutionaries like Patrice Lumumba, Amílcar Cabraland Agostinho Neto call on Cuban guerrillas to help them in their struggle. Cuba will play a central role on the continent. From Che Guevara's tragicomic epic in the Congo up to the triumph of the Battle of Cuito Cuanavale inAngola, this film tells the story of the internationalists whose saga is at the basis of today's word: they won all the battles, but end up losing the war.