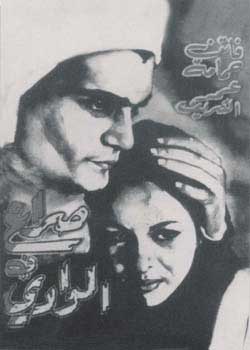 In this acclaimed romance/drama, Ahmed struggles to clear his family’s name after his father’s increased sugar cane production threatens the business of a wealthy landowner, Taher Pasha. Due to the rivalry between their families, Ahmed must also hide his relationship with the pasha’s daughter, Amal. Determined to eliminate his competition, the pasha frames Ahmed’s father for the death of his neighbor, leading to his execution. To complicate matters further, the neighbor’s son seeks vengeance for his father’s death against Ahmed, ultimately leading to the truth and Ahmed’s marriage. Although it debuted in 1954, Sira’ Fi al-Wadi was pronounced one of the best 150 Egyptian films during the Egyptian Cinema centennial in 1996. Furthermore, it launched Omar Sharif’s infamous acting career.