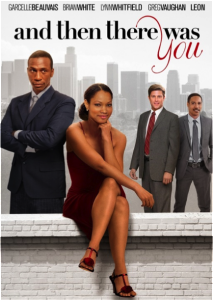 Djansi’s first Hollywood film tells the story of Natalie, a young teacher who dreams of a happy, domestic life with her husband, Leon. However, Natalie has to pick up the pieces of her former life once Leon leaves her for his “outside” family. She falls in love with another man, Darrell, only to discover that he harbors secrets of his own. Darrell’s wife will not grant him a desired divorce, and Natalie does not know whether he will be a lasting, true love. Although the film belongs to the romantic genre, And Then There Was You is also full of surprising plot twists.

Vanessa Martinez, First Look at Leila Djansi's 'And Then There Was You' Starring Garcelle Beauvais. Indiewire (independent film website)

Borys Kit, Garcelle Beauvais to Star in Indie 'And Then There Was You.' The Hollywood Reporter (American media website)

And Then There Was You: Narrative. The Pan African Film Festival (United States film festival that exhibits art and film to promote “cultural understanding among peoples of African descent")

Twum, Chris. “Leila Djansi’s First Hollywood Film And Then There Was You.” The Ghanaian Chronicle. 11 December 2013: Print.