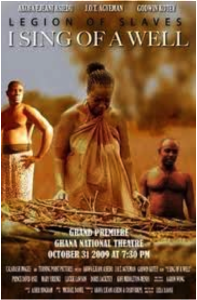 This film is the first installment of the trilogy Legion of Slaves. Set in the ancient Ghanaian empire in the time of the Mali Kingdom under Mansa Musa’s rule, I Sing of a Well tells a story of life before the arrival of Europeans and the emergence of the West African slave trade. The plotline focuses on issues of love, passion, and abuse of power. Prince Wenambe wins the throne from his father after he pledges allegiance to Mansa Musa for protection against slave raiders. In order to take on this position, Wenambe requires a wife. He desires Soraya, who is already betrothed to Dume, a hunter. Stemming from his jealousy, Wenambe has Dume killed and forces Soraya to become his queen although she is pregnant with Dume’s son. Prince Wenambe falls into depression as Soraya’s apathy toward him remains unwavering and his plan to protect his village backfires when Mansa Musa begins to enslave his people.

Ameyaw Debra, ‘I Sing of a Well,’ The Beginning of a Beautiful African Trilogy. Jamati (African entertainment website)

The Woyingi Blogger, Film Review: I Sing of a Well (2009) by Leila Djansi. The Woyingi Blog (a blog exploring the history and achievements of Sub-Saharan Africans)

Movie Review, I Sing of a Well. AfrikCinepedia (An African cinema blog)

I Sing of a Well. The Ghanian Chronicle, 8 August 2009. (Ghanian newspaper)