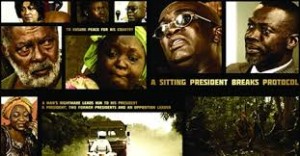 The movie titled “The Pledge: (Ghana will not burn), has veteran actor Fred Amugi playing the role of the late President John Evans Attah Mills of the National Democratic Congress while ex-president Kufuor’s last son Nana, played the role of his father who is popularly known in Ghanaian politics as “the Gentle Giant” as well as other key characters playing the roles of former president Jerry John Rawlings and the NPP flagbearer Nana Akufo-Addo.