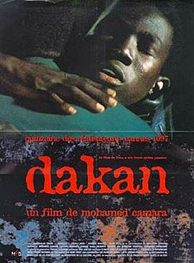 Dakan is the first sub-Saharan film on homosexuality. It tells the story of two young men from Guinea who are shunned by their family and society after coming out as a gay couple. After fighting against their love, and unsuccessfully attempting relationships with the other sex, they reunite, accepting their destiny to be together.

Other movies from Guinea made in