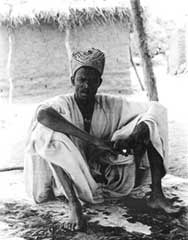 This film, directed by Malian director Cheick Oumar Sissoku confronts the patriarchal traditions of Mali, including the controversial issue of female circumcision. A recent widow, Nanyuma feels liberated from the cruel treatment of her late husband but is ordered by the village chief to marry her husband's equally oafish brother. She leaves the village and hides with her niece Fili but is eventually forced to return. Although her resistance to her culture's rigid traditions stirs her people to a higher level of awareness of freedom and social independence, Nanyuma realizes that her only chance at claiming her own freedom will be by leaving her community. The film's satiric approach is modeled after a theatrical tradition native to Mali. - Jonathan E. Laxamana, All Movie Guid

“Comedy helps make “Finzan” a multidimensional portrait of a community and not just a political polemic.” – New York Times

Academic Articles:
Representation of Female Circumcision in “Finzan, a Dance for the Heroes”
By DeLuca, Laura; Kamenya, Shadrack. Research in African Literatures, Vol. 26, No. 3, Autumn, 1995

Feminism, Anthropology and the Politics of Excision in Mali: Global and Local Debates in a Postcolonial World By Gosselin, Claudie Anthropologica, Vol. 42, No. 1, 2000, pp. 52