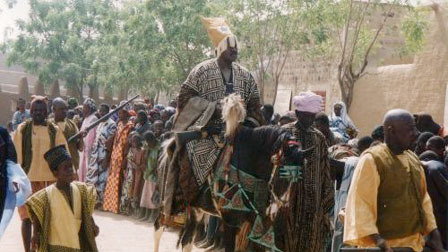 Winner of the most prestigious award in African cinema, the Grand Prize at FESPACO '95, GUIMBA has been acclaimed as one of the most visually ravishing African films ever made. This epic allegory contrasts Africa's tremendous wealth and potential with its present poverty and plunder. Director Cheick Oumar Sissoko comments, "GUIMBA is a political film, a fable about power, its atrocities and its absurdities. I was personally influenced by what I experienced not long ago in Mali, but the ravages of power are, unfortunately, universal." The story has obvious parallels with the 1991 overthrow of Malian dictator Moussa Traore in which Sissoko was active.- California Newsreel