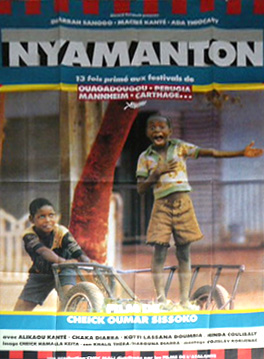 Little Kalifa (Macire Kante) is not allowed into school on the first day of classes because he is too poor to bring his desk with him. So the young, tough eight-year-old watches the other kids pushing and pulling their desks to school and decides to raise his own money to get his own desk; he does this by collecting garbage in his wagon. As he is busy with his garbage collecting, his aunt goes to the hospital to give birth but runs into complications. The doctors give her husband a prescription to get her the medicine she needs, not asking if he has any money. He does not. By the time he borrows the money it is too late, Kalifa's aunt has already died. This trend continues, with death and helplessness created by poverty and the indifference of local institution.-New York Times