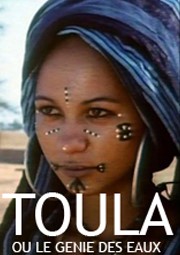 The gods have condemned the land to suffer from a drought, leaving all its inhabitants hopeless. A holy man called forth by the king declares that the sacrifice of a young girl, Toula, is needed in order to appease the anger of the gods. A young man in love with her sets off on a quest to find water in order to save his beloved. But when he returns with it, it’s too late; he finds that the gods had been satisfied, and Toula had disappeared into the sacred pond.