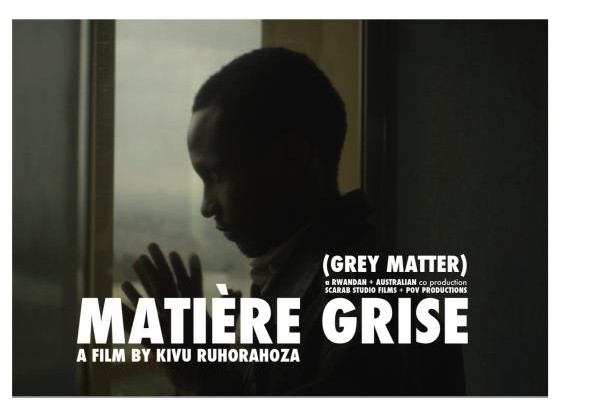 Grey Matter is the first film by Rwandan director Kivu Rahorahoza and it presents the story of fictional director Balthazar on his quest to create the fictional movie The Cycle of the Cockroach. The film-within-a-film is at first thwarted by Rwandan officials who refuse to fund Balthazar's movie because they believe its message is too bleak. Balthazar is forced to conduct business with a dubious loan shark in order to proceed with his movie, putting his own life and economic security at risk for his art. The film he begins to make follows the life of a former Hutu militiaman in an insane asylum and two Tutsi siblings left to fend for themselves, all of whom are trying to make sense of Rwanda in the aftermath of the genocide. This desire to come to terms with tragedy is reflected in Balthazar, who experiences hallucinations of burning bodies and gunfire while he tries to complete The Cycle of the Cockroach - the only thing he can find solace in. The film explores the possibility for healing in the wake of total destruction as well as the interplay of dream and hallucination in the creation of cinema.