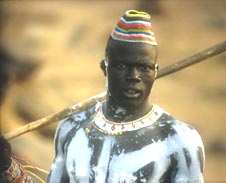 “Kafi's Story centres on Kafi, a young Nuba man from the remote mountain region of Sudan. His story begins on a bus bound for Khartoum where he hopes to get a job and save enough money to buy a dress for Tete, his bride-to-be. The complexities of his love life, his ambiguous relationship with his first wife, Nurr, and his struggle to make money unfold against the background of impending civil war as the unique cultural traditions of the Nuba are threatened by Arabisation. Winner of the prestigious Joris Ivens Award at the Amsterdam International Documentary Film Festival in 1999.” (www.miff.com)

“The Mind and the World." University of California, Berkeley Art Museum and Pacific Film Archive, 2000.