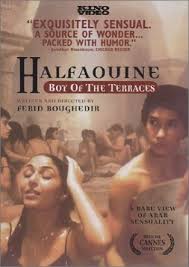 The film tells the story of a young Noura, and his life in his hometown of Tunis. Noura is a young boy of twelve who takes advantage of the arousing opportunities to leer at women in his  mother's bathhouse. His family eventually hires a young female servant, and due to her interest in him Noura has his first sexual encounter. This coming of age story offers some fairly explicit scenes. Boughedir illustrates for the viewers the intricate relationships between women and their male counterparts in Tunisia.

Jerry White, Halfouine as both a Coming-of-age Film and a Subtle Portrait of Modern Tunisia. Philadelphia City Paper (online magazine)