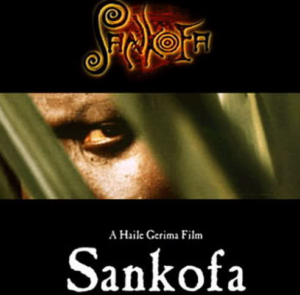 Mona, who is an American model is shooting a film in Ghana. She is filming at Cape Coast Castle which she was not aware was a point of African slave trade. She is introduced to Sankofa who is a highly well known and respected Ghanaian musician. Mona has a flash back to the past where she was a house servant named Shola on a plantation in the South of the United States. Her slave owners were highly abusive. Nunu, who is an African-born field worker, and Shango, a lover of Shola who is originally from India, rebel against the slave trade. Nunu develops a major conflict with son who is of mixed race and has been deemed a head slave. Shola is incredibly inspired by Nunu and Shango and their will to fight back against the slave system.  After her trials, Shola has a flash back to the present as Mona, now highly aware and understanding of her African roots.