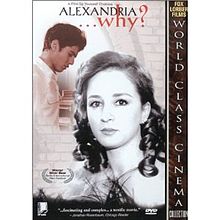 The first film of the Alexandria Trilogy, Iskandariyya…leh? portrays the early life of director Youssef Chahine. A Christian growing up in Alexandria during World War II, Yehia becomes enamored with American cinema because it provides an escape from the horrors of the Nazi occupation. Delving further into his fantasy world, he dreams of traveling to Hollywood in order to become a famous writer, director, or actor. However, as he learns more about the war, it becomes more difficult for him to ignore its harsh realities, especially once he falls in love with a local woman. He often asks himself why did he have the poor luck of being born in Alexandria. This drama won the Silver Bear-Special Jury Prize at the twenty-ninth Berlin International Film Festival. It was also selected as the Egyptian entry for the Best Foreign Language Film at the fifty-second Academy Awards but was not accepted as a nominee.