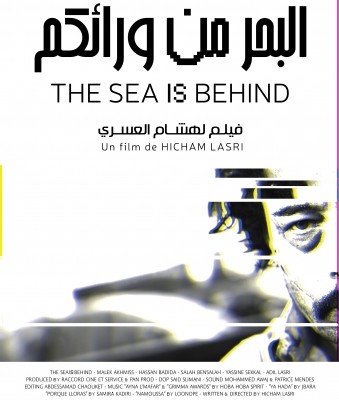 The Sea is Behind follows the story of Tarik, a man who dresses as a woman and dances at weddings for a living, which is an old Moroccan tradition called H’dya. He lives in a land without color, a land where the water is contaminated by a strange phenomenon of “water bugs”, and anyone who drinks this water will be turned mad. He also lives in a world where being homosexual is considered a transgression. Tarik walks through life with indifference, showing little to no emotions, regardless of the events happening around him. His numbness haunts him deeply, and he expresses multiple times his desire for feeling anger and sadness, especially regarding the death of his children. The antagonist and villain Lotfi is revealed as the man who took Tarik’s wife, killed his children and took over his house. However, Tarik obeys this man blindly, his anger towards him failing to reach the surface and translate into action. The Sea is Behind questions gender roles and social stigma, since the notion of a man dancing clothed as a woman is a sight that used to be acceptable in Moroccan culture but is ridiculed and looked down upon in the present.