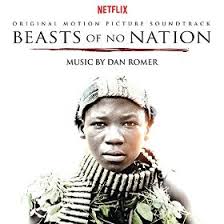 A young Agu and his family live in a small African village with civil war breaking out all around them. The village is informed that the government has fallen, with military rebels seizing hold of their country. Agu and many other children in the village are involuntarily enlisted into a battalion of child soldiers in this heart wrenching film that exposes the harsh realities of the lives of child soldiers forced into combat.

A.O. Scott. Review: 'Beasts of No Nation', a Brutal Tale Of Child Soldiers in Africa. The New York Times

Joe Morgenstern. 'Beasts of No Nation' Review: The Spoiled of War. The Wall Street Journal

Ty Burr, In 'Beasts of No Nation' the every day life of a child soldier. Boston Globe (online newspaper)