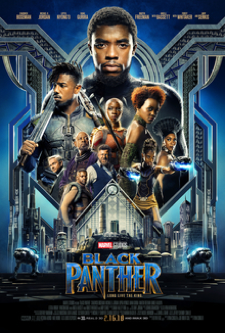 Following the death of his father, T’challa returns to take his place as king to the African Nation of Wakanda. With the sudden reappearance of a powerful enemy, T’Challa’s mettle as king, as well as Black Panther, is brought to test when he’s drawn into a war that puts the fate of Wakanda along with the rest of the world at risk. Confronted with deceit, perfidy and peril to his people, the young king must rally with his allies and unleash the power of the Black Panther in order to overthrow his nemeses and ensure the safety of his nation and people.

Christopher Lebron. "Black Panther Is Not the Movie We Deserve." Boston Review.

Christopher Orr. "Black Panther is More Than a Superhero Movie." The Atlantic.