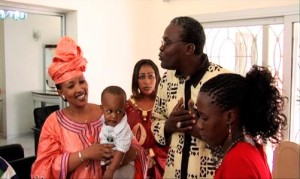 "Min Ye" stars Assane Kouyate as Issa, a filmmaker who lives in the torment of jealousy and suspicion about one of his wives, Mimi, who works as a doctor for a national development project. The couple's sources of income are far from clear-Issa's weighty occupation suggests only that he's sensitive and thoughtful, in spite of his clinging to the polygamist tradition; her work is seen only briefly, and it doesn't occupy much of her time. Indeed, what the couple do spend much of their time on is scheming-she to meet her lover; he to catch her in the act-and then quarreling, rendered by Cisse in repeated, explosive outbursts.

The emotional fireworks mainly come from Mimi, Issa's least favorite wife in this comedy of unmarriage, whose moods and whims change with her wardrobe. And what a wardrobe: her flowing caftans of shimmering, vivid fabric and puzzlingly large golden rings are nearly overshadowed by her great gobs of makeup and a medusa-like shock of shiny, black locks. She's a force to be reckoned with-and aims to prove it when Issa's impatience and suspicions prompt him to involve his lawyers.