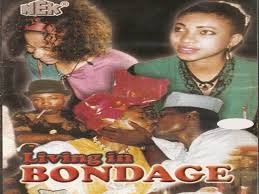 The film is a thriller with supernatural elements. It tells the story of a man who joins a secret cult, kills his wife in a ritual sacrifice, gains enormous wealth as a reward, and is afterwards haunted by the dead wife's ghost. This film heralded a new phase in Nigerian cinema and turned the Nigerian film industry into a force to be reckoned with when it became the first Nollywood blockbuster. Since shooting on celluloid was costly and unfeasible, Living in Bondage was short straight-to-video and released on VHS and was in instant success paving the way for an alternative to expensive film-making.

Rebecca Jagoe, From Living in Bondage to the Global Stage: The Growing Success of Nollywood. The Culture Trip (online magazine)