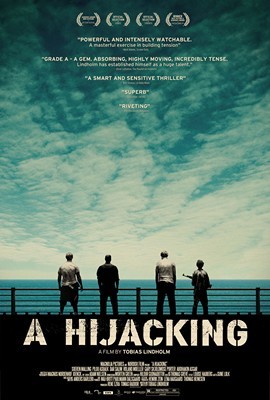 The cargo ship MV Rozen is heading for harbour when it is hijacked by Somali pirates in the Indian Ocean. Among the men on board are the ship’s cook Mikkel (Pilou Asbæk), who along with the rest of the seamen are taken hostage in a cynical game of life and death. With the demand for a ransom of millions of dollars, a psychological drama unfolds between the CEO of the shipping company (Søren Malling) and the Somali pirates. A Hijacking is filmed under realistic conditions. The crew filmed in secret in pirate filled waters in the Indian Ocean on a freighter which itself had previously been hijacked and with a real professional negotiator in a central role.