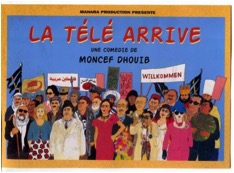 This film focuses on the small south Tunisian village of Al-Malga. The village is put into action when a series of phone calls from the capital announce the approaching visit of a prestigious German TV production team in the region. The villages cultural committee decides to project a positive image of the village in attempt to mask the negative reality of the nation. Chaos ensues when disagreements surface on the best course of action to take.