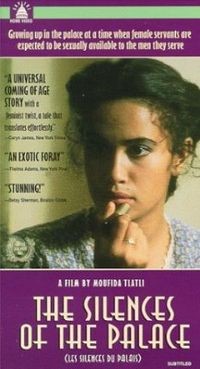 Following the death of the prince for whom her mother worked as a kitchen hand, 25-year-old singer Alia returns to the palace where she spent her childhood to pay her respects. In doing so, she also flees from her controlling lover who wants her to have an abortion. As she explores the dilapidated palace, she recalls her youth, which she hasn’t thought about since her mother’s death, and reflects on her mother’s position as a servant who was expected or forced to be sexually available for the tender prince (who may have been Alia’s father) and his cruel brother.

Nathanael Hood, The Silences of the Palace. Forgotten Classics of Yesteryear.

Paul Sedra, Films for the Classroom: Silences of the Palace. Jadaliyya.

Rice, Laura. “Refracting an Orientalist Lens: The Instability and Performance in Moufida Tlatli’s The Silences of the Palace.” Women & Performance: A Journal of Feminist Theory 17.1 (2007): 37-57.

Slawy-Sutton, Catherine. “”Outremer” and “The Silences of the Palace”: Feminist Allegories of Two Countries in Transition.” Pacific Coast Philology 37 (2002): 85-104.