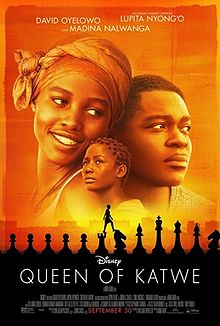 Based on the life of Phiona Mutesi, a young girl’s life in in Katwe, a slum in Kampala, Uganda is changed when she meets Robert Katende. Katende teaches the children how to play chess. Curious, Phiona gradually learns the game. Soon, she becomes captivated by it and becomes one of the top chess players in her area. Chess emerges a possible means of escape from Katwe for Phiona and her family.

Scott, A.O. “Review: In ‘Queen of Katwe,’ a Pawn Finds Her Crown Through Chess.” The New York Times (online publication).

Singh, Amardeep. “Where do you Belong: Returning to Uganda in Katwe.” The Films of Mira Nair: Diaspora Vérité.  Univ. Press of Mississippi, 2018.