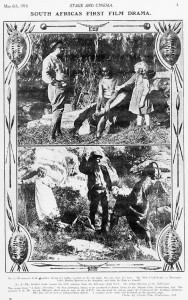 A faithful Zulu farmhand frustrates two half caste stock thieves plans on the farm. The farmhand essentially saves the farm and rescues his mistress from the thieves hands.

Film Review: Investigating the Origins of The Rose of Rhodesia, Part I: African Film Productions

Academic Writing on Film: To Change Reels: Film and Culture in South Africa