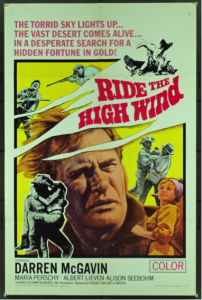 This film is also known as African Gold. It is about a pilot who barely survives a plane crash. When he awakes from the crash, he sees an abandoned wagon but does not think much of it. A couple luckily takes the pilot in, taking good care of him. They too also mention about the wagon a couple of times. When the pilot is ready to return home to Johannesburg, he learns that the wagon is supposedly filled with gold. He returns back to Southwestern Africa, with his son and his son’s girlfriend, where the plane crash happened to find this wagon. He meets with the couple that took him in again but this time, they take him as hostage. The wife ends up feeling guilty for kidnapping them and decides to free them, also costing her life. They end up finding the treasure in the cave but it turns out that it was actually lead and not gold.