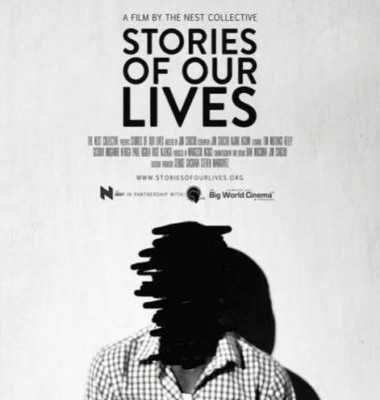 Stories of Our Lives is an Anthology of five vignettes. Each one focuses on different characters and tells a different narrative; but they all tell the same story. That of love -- the way in which it is both frighteningly familiar and intimately alien.

(1) Ask Me Nicely. Set in a Kenyan all-girls high school, troublemaker student Kate encounters Faith. Their attempts at maintaining their intimate relationship a secret one is spoiled when their peculiar affinity catches the Principal's attention. In an effort to separate the two, Kate is suspended, during which she engages in a spontaneous sexual encounter with a boy from her neighborhood. What was an attempt to explore her sexuality and confirm her affections toward Faith will soon affect their in irreversible ways.

(2) Run. This vignette starts with a business interaction between a disc duplicator and best friends Kama and Pato. The pair pass by a gay bar resulting in Kama going on a rant about his hatred for homosexuals. A few days later, Pato decides to go back to the bar in which he ends up having an amatory experience with a gay man. Overwhelmed, Pato heads out for some air -- exposing himself to Kama who witnesses his best friend come out of a gay venue. The next day, Kama confronts Pato and it quickly escalates into a violent clash between the two. Pato runs.

(3) Athman. The story of a friendship between Athman and Ray -- both of whom work in a farm together -- is a complicated one. They both love each other, but in very different ways. One day, after Ray is visibly upset about Athman's blatant flirting with his new lover Fiona, the friends decide to have a conversation. Athman tells him that he isn't gay and cannot love him other than platonically. To which Ray declares that he will leave the farm and look for another job; for, it is easier to never see the object of his affection than to face daily rejection. Athman fights for his friend and implores him to stay. Alas, the unreciprocated love becomes too much for Ray to bear and he runs away. Athman finds out that his best friend has left and desperately tries to catch him. He is too late.

(4) Duet. This story is shared between two people. One is Jeff, a Kenyan man who is in the UK attending a conference on Gender Diversity, and the second is Roman, a British university student who is trying to make ends meet through sex work. Jeff, who is increasingly nervous, asks for the two to talk before engaging in sexual activity. The two discuss interracial relationships and the dynamics of race within the context of pornography. The two share an intimate moment -- physical but not sexual -- and create a sensual bond.

(5) Each Night I Dream. Feeling helpless after hearing announcements from Kenyan local legislators that citizens should mobilize to fight against 'gayism' and perform citizen arrests against homosexuals, Liz escapes through her dreams. She dreams about what might happen if they get caught, if they should fight or run, what would they leave behind, and where would they go? Combined with tragically real uprisings against 'gayism', it is hard to tell what is a dream and what isn't.  This vignette delves into tribal stories and ends with Afrofuturist tones -- calling upon the alien nature of marginalization.

Blay, Zeba. "Anthology Film Asks "If We Are Not Africans, What are We?," Review of Stories of Our Lives, directed by Jim Chuchu. IndieWire, Sep 2014.

Davenport, Danielle. Review of Stories of Our Lives, directed by Jim Chuchu. One Room with a View, Mar. 2015.

Takeuchi, Craig. Review of Stories of Our Lives, directed by Jim Chuchu. The Georgia Straight, Apr 2015.