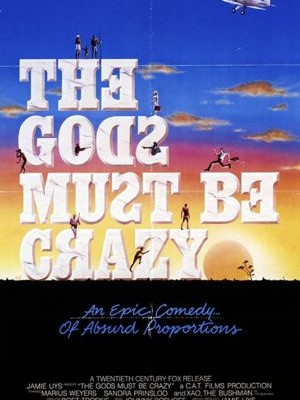 Xi is a Sho in the Kalahari Desert. His tribe has had no contact with the Western world. Then a Coke bottle is found, which the tribe views as a gift from the gods. However competition to control the bottle causes violence within the tribe. Xi takes the bottle on a quest to throw it off the edge of the world. On his quest he meets a diverse group of characters such as a biologist, a schoolteacher who becomes a love interest, and a guerilla leader. Xi is thrown in jail over a misunderstanding about a goat he was trying to eat, but to avoid the jail sentence he is hired as a tracker by the biologist. While working as a tracker he saves the schoolteacher and her students from the guerillas holding them hostage. The biologist allows Xi to go free and he throws the Coke bottle off a large cliff, which he believes to be the edge of the world, and returns to his tribe.

Roger Ebert, The Gods Must be Crazy, rogertebert.com

Hunter, Linda. “”The Gods Must be Crazy”: Unsolicited Opinions.” Issue: A Journal of Opinion 14: 34.

Lee, Richard. “The Gods Must be Crazy, but the State has a Plan: Government Policies towards the San in Namibia.” Canadian Journal of African Studies 20: 91-98. Web.