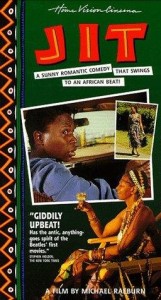 ‘Jit’ is a love story set in Harare in the late 80s. A boy named UK is doing everything to make an impression on Sofi and to win her over. Sofi however, is guarded by her jealous gangster boyfriend, while UK is constantly hindered by
Jukwa, an ancestral spirit. UK lives with and works for his uncle, played by legendary musician Oliver Mtukudzi.