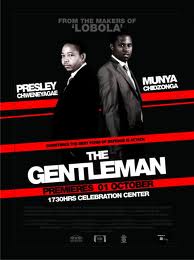 The movie is set in the cities of Johannesburg and Harare, where two twin brothers living separate lives are brought back together by adversity. This action-packed film depicts the lifestyle of deceit, corruption, wealth, and loyalty in the two cities. The twin brothers find themselves on the wrong side of a gangster where their obligations are tested as they fight to honor their loved ones. The main character is forced to make a decision to save his dying wife or go against his beliefs.

Edwin Mathe ,Why not be "The Gentleman." Zimeye (Online News Site)

The Gentleman Up For US Awards. Entertainment (Online magazine)