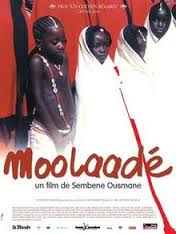 When a woman shelters a group of girls from suffering female genital mutilation, she starts a conflict that tears her village apart. This drama which deals in part with the barbaric practice of female genital mutilation (generally involving removal of the clitoris and temporary closure of the vagina), which is still practiced in a number of African nations in the name of "purification." Six girls who are scheduled to undergo the traditional purification ceremony escape and four make their way to the home of Colle Ardo Gallo Sy (Fatoumata Coulibaly), a wife and mother who is sympathetic to their dilemma. Colle casts a "moolaade" spell, which will bring harm to anyone who attempts to hurt those under Colle's care. Colle finds few supporters in a village where tradition is sacred and change is regarded with great suspicion; the men who rule the tribe and the women who conduct the purification rituals both make their displeasure clear, but none can persuade Colle to vanquish the spell, which the others are obligated to respect. Meanwhile, Colle's daughter Amsatou (Salimata Traore) is facing a dilemma of her own.