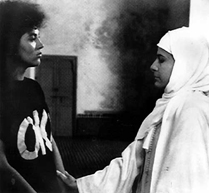 This film goes into the topic of embracing the Islamic culture as a woman. The protagonist in this film, Nadia, comes home to Morocco from Paris. Being a model for western culture Paris instilled values in Nadia that went against the traditional Muslim religion. Benyazid develops the protagonist into an individual who at the beginning is separate from her religious roots. Upon coming back to the predominantly Islamic city of Fez, Nadia develops a close relationship with Kirana. After the death of her father Kirana becomes Nadia’s spiritual mentor and shows her how to become more comfortable within the Islamic faith. In this story Farida Benlyazid reveals a softer side of Islam vastly different from the radically strict model commonly shown in the media.