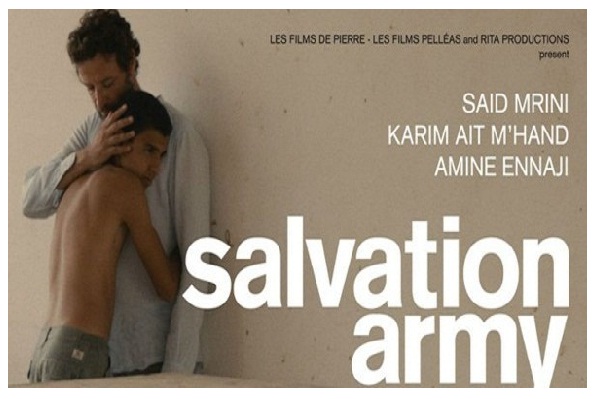 Salvation Army is an adaptation of a novel, under the same name. Abdellah Taïa is both the author of the original book and the writer/director of the film. The film was produced by Les Filmes de Pierre; in co-production with Les Films Pelléas, Rita Productions, Ali n' Film, Radio Télévision Suisse, SRG SSR idée suisse; in association with Cofinova 8 and with the participation of Centre National de la Cinématographie. It was distributed with Strand Releasing (USA) in 2013/2014, and Rézo Films (France) in 2014. As relating to distribution, it is notable that the film was screened at in Morocco at the 2014 Tangier Film Festival. It reportedly the first autographically-inspired movie with a gay theme (among other themes within the film) to be public screened in Morocco.

Salvation Army follows portions of the life of its central character, Abdellah, first as a young adolescent boy in a suburb of Casablanca, and later as a college student in Geneva, Switzerland. In the former part of the film, Abdellah struggles as a member of a large family, particularly with his relationships with his mother, father and older brother. He is  shown to be sporadically sexually abused by much older men on multiple occasions, and it is clear that this remains unspoken between him and his mother or father. It is also evident that Abdellah is struggling with his own sexuality as an adolescent, not only because all of his sexual encounters happen secret, but because homosexuality accepted in his community or family. In the latter part of the film, Abdellah conducts a romantic and sexual relationship with a man as he continues to grapple with his identity, culture and different way of life in Geneva.

Another U.S. perspective on the film:
https://www.slantmagazine.com/film/review/salvation-army

An Indiewire interview with director:
http://www.indiewire.com/2013/09/queeries-salvation-army-director-abdellah-taia-on-the-challenges-of-making-a-queer-moroccan-film-34727/

A take on the cultural, political and social climate of the film:
http://www.mei.edu/content/article/arab-queer-cinema-emerges-break-taboos