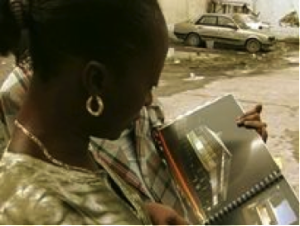 Mireille Ngatsé had lived for several years in the Maison Tropicale in Brazzaville. It was designed by Jean Prouvé, the famous French constructor and architect. Ms. Ngatsé describes the aluminum house as comfortable, even though it had no electricity or running water. She loved the fresh air and the light coming in through the round blue windows. One day, four men came from France to Brazzaville, and took the Maisons Tropicales away in containers. Today, Mireille Ngatsé sees her house in a catalogue, and reads about it as it is being exhibited around the world as a precious art object. Manthia Diawara’s documentary is a complement to Ângela Ferreira’s artistic project on the Maison Tropicale by Jean Prouvé, which was shown at the Venice Biennale. The film brings to life the hidden stories and memories of those left behind in Africa when the Maisons Tropicales were removed. It is a postcolonial excavation into African identity, art and the notion of cultural patrimony.