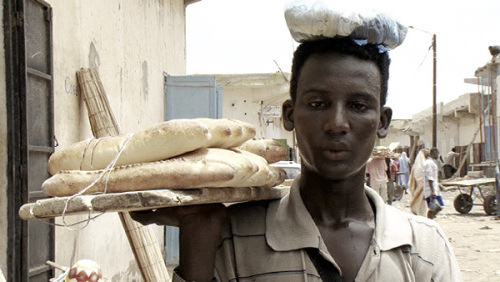 Producer: Art for the World

Funded by the European Union.

An initiative of the United Nations High Commissioner for Human Rights.

Abderrahmane Sissako's contribution to the United Nation's project "Stories on Human Rights" focuses on the question of dignity. In the short film, the director asks several individuals the same question: "What is dignity?". No one offers a response; however, Sissako's inclusion of many close-up, long takes of the individual's faces highlights the ways in which this question and others concerning human rights do not have a single answer. Interspersed between these close-ups are clips of busy city life, which continues despite the unanswerable questions of daily existence. In a discussion of the film, Sissako said: "I think it’s very difficult to deal with such sweeping concepts as justice and dignity ... so I looked for an idea that actually asked the question, ‘What is dignity?’ rather than answering it […] Anyone can speak about it, no matter where they come from. I’m an artist and part of my identity includes being universal. As a film-maker, I’ve always wanted to tell the story of people who have really difficult lives and deep down resent injustice, but still manage to keep going, to keep living. Perhaps that’s dignity.”

"The result was twenty-two short films edited into one long feature film, revealing the world’s great diversity and cultural wealth, as well as hopes and concerns about the present state of human rights around the world. Indeed, by conveying the timeless significance of human rights and their underlying values, Stories on Human Rights offers an opportunity to reflect on the wide historical and human significance of the adoption of this landmark Declaration." - Art for the World.