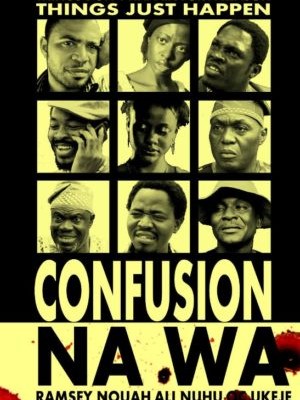 Set in a Nigerian city, Confusion Na Wa is a dark comedy about a group of strangers whose fates become intertwined over the course of 24 hours. At the heart of everything is a phone found by two opportunist wasters Charles and Chichi who, having read through its contents, decide to blackmail the owner Emeka. Little do they realize that their misdemeanors have set in motion a chain of events that will lead to their own downfall. Confusion Na Wa was winner of the 'Best Picture' category at the 2013 African Movie Academy Awards.

Connor Ryan, Kenneth Gyang's "Confusion Na Wa" and the Growing Desire for Variety and Novelty in Nigerian Cinema, Africa is a Country