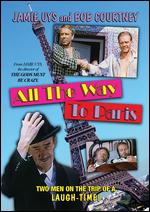 Jamie Uys writes, directs, and stars in a comedy film that is an equal blend of satire, slapstick, and social commentary. Uys is Igor Strogoff, a Russian delegate to a worldwide peace conference. When Strogoff and the American delegate, Bob Courtney, fail to settle their diplomatic differences, they resolve to compete in a winner-takes-all walking race. The duo sets out from Athens towards a Parisian finish line, and experience many humorous mishaps along the way. It is the first South African film to be filmed overseas and locations include Greece, Yugoslavia, Austria, Switzerland, Lichtenstein, Italy, and France.

'All the Way to Paris’ (AKA – ‘After You, Comrade’) M-Net (African broadcasting company)