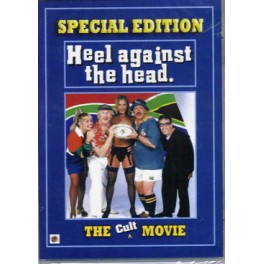 A South African comedy film based on the multi-award winning play of the same name. Tjokkie and Crispin travel to Wales to attend the 1999 Rugby World Cup. The pair end up staying at a small hotel where they befriend an Asian computer salesman. They try to teach their new friend about the game of rugby, only to have some very amusing misunderstandings. Their hijinks culminate when they summon a call-girl to the hotel room, only to have Crispin’s wife show up unexpectedly to celebrate their wedding anniversary. Tjokkie becomes a reluctant hero when he has to cover for his friend. Inspired by the South African win of the Rugby World Cup in 1995.

Heel Against the Head: The Cult Movie Vetseun (synopsis)

Tjokkie Herington Wikipedia.org (background on the character of Tjokkie, who also appears in another South African film called Running Riot)