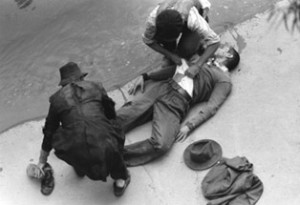 Jobman is a boy who is born deaf and missing a tongue. He is also black, living in apartheid-era South Africa. His father is a preacher, would make him have a high rank, but because of his deaf status he is only viewed as a laborer. He is then outcaste and gets beaten up in the city. He then becomes a renegade and everyone but his childhood friend takes up arms against him.

Botha, Martin P. The Struggle for a South African Film Audience. Kinema: A Journal for Film and Audiovisual Media.

Botha, Martin P. Themes in the Cinema of Darrell James Roodt. Kinema: A Journal for Film and Audiovisual Media.