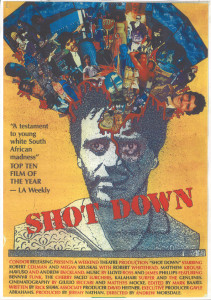 Shot Down revolves around a whingeing, self-loathing police spy who infiltrates the Joburg bohemian demimonde during the State of Emergency. These were the heady days of Jameson’s and the Black Sun – nightspots popular among white lefties – where life seemed soaked in sleaze and subversion.