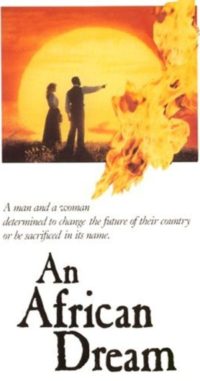 Filmed on location, An African Dream stars John Kani as a black African resident of the early 20th century who spends several years in England. Having received a "proper" white man's education, he returns to his homeland as a teacher. While his illusions about bridging the gap between the white and black populations in Africa are doomed to failure, he finds a unexpected kindred spirit in the form of Kitty Aldridge. A white resident of a recently established British colony, Kitty is attracted to the idealistic Kani, and he to her. That their relationship fosters resentment from others is indicated by the "PG for violence" rating bestowed upon An African Dream. -- Hal Erickson