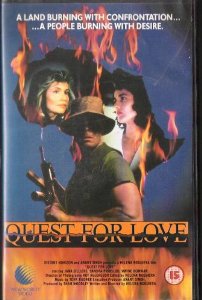 Set against political turmoil in Southern Africa, the film uses flashbacks to create a rhythm between Alexandra's memory and her current self-discovery, climaxing in her reunion with Dorothy. It is a complex structure, but Nogueira manages to create a film of emotional power, and presents us with three-dimensional lesbian characters - one experiencing conflicts regarding her role, the other at ease with herself and her sexual orientation.